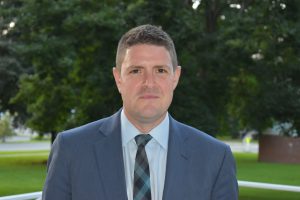 New Jr./Sr. High School Principal Matt Sloane felt a longing to be back in a school district, and have a connection to students, teachers, and a community again. He says the position in Middleburgh, which opened after Lori Petrosino’s retirement this summer, presented a unique opportunity that he couldn’t pass up.

Mr. Sloane graduated from the University at Buffalo and received his Master’s Degree at Suffolk University. He began his 16-year education career in Boston Public Schools in Boston, MA, first as an English and Humanities teacher at the middle and high school level for eight years, then as Director of Academic Turnaround at a middle school for a year.

After that, Mr. Sloane and his family moved back to New York and he was hired as Middle School Principal at Howard L. Goff Middle School in the East Greenbush School District. During his tenure there, the middle school moved from being the 23rd ranked middle school in the Capital Region by the Albany Business Review to 9th. Mr. Sloane says the improvement came from focusing on student engagement and achievement. 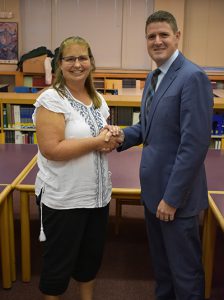 For the past three years, Mr. Sloane has served as Deputy Superintendent of Questar III BOCES, supporting districts with their academics and their vision. But it was that longing to be back in a district that brought him to Middleburgh.

Mr. Sloane’s previous experience with turning around struggling schools and his connections to the State Education Department make him uniquely suited to Middleburgh’s educational needs. He says the key to removing Focus School designations lays in understanding the source of the school’s problems, and then focusing on specific areas to get off the Focus School list.

Crafting engaging content that students are able to access and connect with now and in the future is key to kick starting Middleburgh’s academic success, according to Mr. Sloane. He says his focus will be on students and the community, and how the many moving parts of the educational field interact.

Mr. Sloane is married to his wife, Lauren, who is from Greenville in Greene County, and has three young daughters: Avery, Harper, and Brooklyn. In his free time, he enjoys music, camping, and hiking.