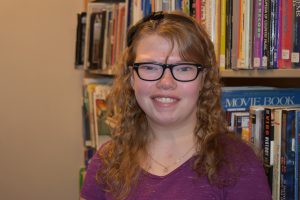 What started as fan fiction years ago has now realized itself in a published, 166-page book available for purchase through Amazon and Barnes & Noble. (Fan fiction is the process of writing fictional works about characters and settings from an original work of fiction, but written by fans.) “Sabrina Banner: The Soul of a Sorcerer, Book One” was published by Isabel in June through the publisher AuthorHouse. The book is already in the top 1,000 in Amazon’s “Sword & Sorcery” Fantasy category.

Isabel says that ever since she was little, she has had a desire and passion for writing. About three years ago, she decided to put something bigger together instead of working on shorter stories all the time. She credits the reactions to her fan fiction pieces as her motivation. “Ever since I was little, I had a desire and passion for writing,” Isabel says.

Isabel also sees the book as a major milestone, as she was born with 22Q11.2, otherwise known as DiGeorge syndrome. It’s a condition that can affect the heart, immune system, and more.

Isabel says that “Sabrina Banner” had big influence from Marvel’s Dr. Strange and Rick Riordan’s “Percy Jackson” series. She published through AuthorHouse, working with them for about a year before her book was published last month.

When she was first able to hold one of her own books in her hands, Isabel described the experience as surreal. She says she has gotten a lot of positive feedback from family and friends, and will find out more information about initial purchase numbers in the next couple of months.

Looking back on her own fan fiction roots, Isabel says that she would love to see fan fiction written about her own work one day. She says she plans for “Sabrina Banner” to be a trilogy eventually, and would like to add some prequels down the line as well. But she isn’t rushing it. The process for book one took about three years from the start of the writing process to publishing. Isabel says she isn’t sure how long the next one will take, but says she learned a lot in this process.