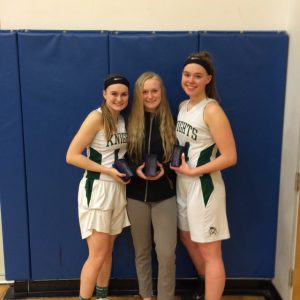 Seniors Megan Brown and Kelsey Terrell were honored at the WAC Exceptional Senior Games at Mekeel Christian Academy. The two Middleburgh players combined for the game’s first 20 points, and at halftime they were both named as 1st Team All Stars. Makenzie Terrell was named a 2nd Team All Star.

At the conclusion of the Exceptional Senior Game, Kelsey was named MVP. Congratulations to all three of our players on their outstanding season and their awards.