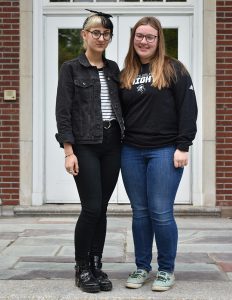 At the top of the Class of 2019 are two students who, at first glance, couldn’t be more different. The valedictorian, Sophia Soloveitchik, native of Russia and a cheerleader. The salutatorian, Carolyne Shultes, lifelong Middleburgh resident and state bowler. But looking beyond the superficial, you can see how these two rose to the top of their class and are ready to take on the world after graduation.

Both plan to study Chemical Engineering in college. Sophia will do so at Cooper Union in New York City, looking to use her degree in researching the efficiency of materials, possibly to help with the environment or making better paints. Carolyne will study at Clarkson University with a minor in Environmental Engineering, where she hopes to focus on chemical remediation or something else to benefit the environment.

For Sophia, just the fact that she has succeeded as she has is testament to her determination and growth. “There were a lot of changes coming here,” she said. “A new school, speaking a new language, going from a big city to a small town, taking the bus to school.” She also pre-translated her questions for teachers when she first arrived, so she wouldn’t make a mistake with what she was asking. That is what most concerned her then: making mistakes.

“Don’t be afraid to make mistakes,” Sophia says in advice to other students. “When I moved here, that was the scariest thing, but mistakes can be good. Taking risks is good because otherwise you won’t get experiences out of life.”

Finding her passions also helped Sophia integrate herself into Middleburgh. When she first arrived, she didn’t join a lot of afterschool activities because she didn’t realize how important they were. But then she joined cheerleading, she helped make sets for the drama club, and joined Envirothon.

Envirothon was a big part of Carolyne’s Middleburgh career as well, along with her well-documented dominance in bowling. But in Envirothon she found the best of both worlds: competition and science. She credits balancing bowling, Envirothon, and her academics with helping prepare her for college.

“I took a lot of college courses and higher level courses which gained my interest and made me study more and work harder, which in turn really paid off in the end,” she said. “Studying is the big one. I learned how to study effectively so I could spend less time studying and do other activities.”

Carolyne also had some advice for future Middleburgh students. “Always take a deep breath and realize whatever you’re stressing over is not the end of the world,” she says. “Do those extra clubs or activities, because they take your mind off academics and you can build lots of connections.”

Both Sophia and Carolyne also singled out specific teachers who helped them on their academic journeys. Sophia thanked Mr. Truesdell, Mr. Thaxter III, and Mr. Bender for their assistance with math and science courses and helping her find her academic passions outside of art. Carolyne thanked Mr. Bender for helping her discover her love of chemistry and Mrs. Burgett for helping her see how she could make a difference in the world.

Sophia and Carolyne know they’re well prepared for the world outside of Middleburgh thanks to their teachers and experience here at MCS. “You don’t have to be perfect to be accepted,” said Sophia. “You just have to work hard, express yourself, and be dedicated in the field you want to be in.”