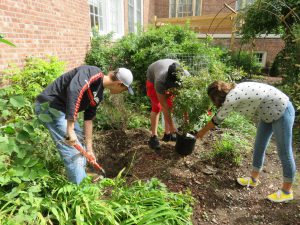 On the 11th hour, of the 11th day, of the 11th month of 2018, people all over the world will commemorate the centenary the Armistice that ended World War I hostilities.

November 11th became known as Armistice Day and was declared federal holiday dedicated to the cause of world peace. Armistice Day was later changed to Veteran’s Day to recognize those who have served in the US Armed Forces and those who lost their lives in the defense of freedom and democracy.

Middleburgh Central School’s History Department has planned a series of community activities in recognition and celebration of the 100th anniversary of this important historical event.

The first of these events was the symbolic planting of two “Peace Rose” bushes. On Wednesday, several students and teachers gathered to plant one of the rose bushes in the courtyard at the Jr/Sr High building and the other near the Old School House at the Elementary School.

The planting of these roses launch the MCS celebration of the 100th anniversary of the agreement to stop the fighting of the First World War with the intention that each year the roses in bloom will be a reminder of the sacrifices that have been made in hope of world peace.